Stacey is the WAHM behind Three Monkeys Cloth Diapers and she is quite awesome if I may say so myself. She has been making cloth diapers for about two years ever since she was pregnant with her twins. With the supply she would need for twins she just couldn't justify paying the huge corporate company hundreds of dollars. She has been sewing since she was about 6 or 7 years old, when her mom showed her how to sew her own Barbie clothes. So Stacey figured with a pattern she could sew her own diapers and after many, many revisions, she is really proud with what she has to offer. As she most definitely should be, wait I can't jump the gun with my excitement! Back to Stacey and how Three Monkeys Cloth Diapers came about!

Stacey's diapers have been tried and tested by tons of babies with feedback from her customers and her own experience on her own babies. She has sold her diapers on Ebay (threemonkeysclothdiapers) with over 450, 100% positive feedback left. While she can sew anything from costume to curtains, her main focus in on cloth diapering needs. She loves special orders and is always more then happy to work with her customers to get the perfect diaper for your baby. Her diapering business has been so good, she recently had the pleasure of inviting her friend and fellow SAHM, Shalisha to join her in the producing of Three Monkeys Cloth Diapers. Her friend Shalisha has a 13 month old son and another new little one born back in December. Three Monkeys has now grown to 4 little monkeys and 1 big monkey! 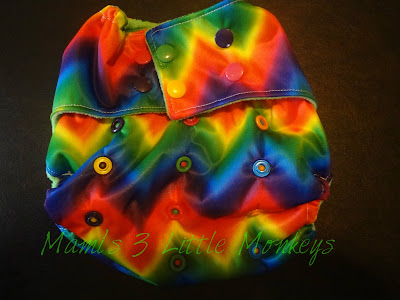 Rainbow Chevron! DROOL! This print is so awesome, it has been my new LOVE! The design of Three Monkeys Cloth Diapers is also a new love of mine! 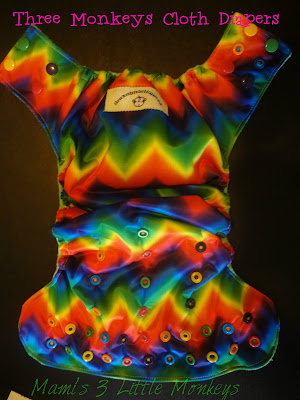 Three Monkeys Cloth Diapers are pocket diapers, but they are not your ordinary pocket diaper. The opening is in the front of the diaper (see below) and the wings/tabs are shaped a bit different, as you can see in the above photo. 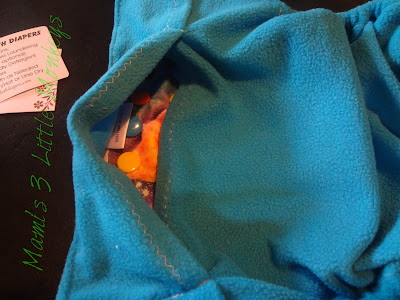 The pocket is nice and wide, allowing for easy stuffing and your hand does not become caught inside. I have tried other inserts then what is provided by Three Monkey Cloth Diapers and they have all fit in this pocket diaper perfectly! No bunched up inserts, one of my biggest cloth diapering pet peeves! I absolutely love that the pocket is at the front of the diaper rather then at the back as when there is an almost explosive poop you don't have to try and pull the inserts out, with out getting poo on your hand! Awesome!

The pocket diaper is made with a no wicking PUL fabric as the outer layer, available in solid and prints with no need for a cover, also has a Cuddle Dry Microfleece (CDMF) inner lining for a stay dry feel against baby's delicate skin. Made with quality KAM snaps, which are placed at eleven 1" increments along the belly in two rows allowing NO wing drooping, three columns of four rise snaps as well as cross-over snaps for maximum adjust-ability on the wings. The pocket diaper also comes with an awesome multifunction bamboo fleece soaker which I absolutely love the design of as well!

The Multi-function soaker is made with 2 layers of 16 oz. 70% bamboo and 30% organic cotton fleece and measures a total length of 32 inches and can be folded in half to make a four layer 16 inch quick dry pad. Above you can view the different folds that Three Monkey Cloth Diapers demonstrates. I prefer to fold the two short ends inside of the the long ovular part so I have four layers in the front as I have two boys.

Above is a photo of the front of my soaker with how I fold it, but you may fold or unfold the soaker however it would work best for you and your little one.

So do you think the Three Monkeys Cloth Diaper and Multi-Functioning Bamboo Soaker succeeded in the Cade challenge?! If you guessed, yes, then you are definitely correct! The wings are long enough that they nearly reach the center of the belly snaps! That is one huge step for this pocket diaper already, I was able to achieve and maintain a great fit on Cade who is 3 years old and about 39lbs. The Bamboo Soaker folded how I show in the photo above doubled with another insert lasts Cade all through the night and he is a heavy wetter! I would definitely say this pocket diaper would fit beyond the recommended/approximate weight of 35 pounds per Three Monkey Cloth Diapers. 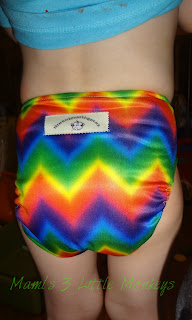 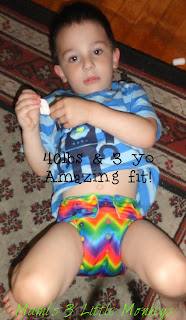 Three Monkeys Cloth Diapers are very trim, even when "over stuffed". Cade has wider hips for his age and for being male, while that is not an issue for other things, when it comes to finding a diaper that will fit, it is very slim to none however this awesome pocket diaper has most definitely fit Cade the best out of all the diapers we have tried and is about equal to one with how the wings are longer then usual, but Three Monkeys Cloth Diapers definitely beat the other diaper by functionality. I will update with a photo of the front of the diaper on Cade.
Of course this diaper is also awesome Ezio, I usually switch off between putting it on the two boys. I get a great fit with this diaper on Ezio as well. Ezio is 18 months and 26lbs. 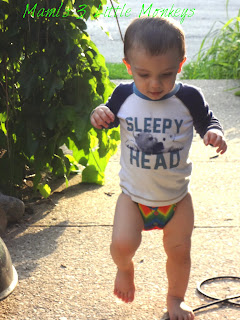 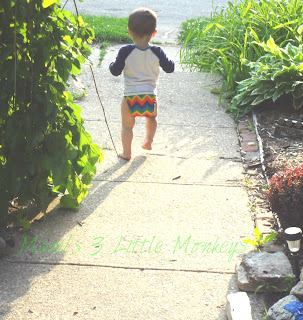 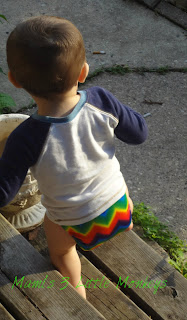 Ezio is a silly little one. Loves to be warm, but never wants pants, socks or shoes on. Anyhow, back to this awesome diaper. Ezio has a skinny waist and fairly skinny thighs, Cade's thighs are skinnier, but Ezio's waist is smaller. I usually have leaks at the waist line of diapers with Ezio as I usually can not get a snug fit in the waist and there is often a large gap between his waist/tummy and diaper. Perfect snug fit with this Three Monkeys Cloth Diaper, no red marks left behind either. 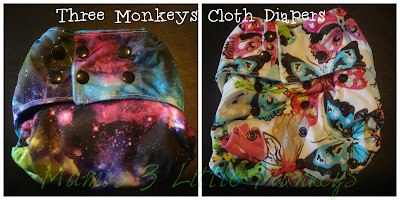 Prize: 1 Butterflies OS Pocket Diaper & 1 Galaxy OS Pocket Diaper including 2multi-functioning bamboo inserts.
Giveaway Details: This giveaway will run from 12am on July 17th through 11:59pm on July 31st and is open to US residents whom are at least 18 years of age at time of entrance. To enter head over to the Summer Fluffing Giveaway Hop and enter for your chance to win!!
Good luck!

Which other print do you like that Three Monkey's Cloth Diapers has?

Disclosure: I received the above diaper in exchange for my honest review, all opinions and experiences are my own and may differ from those of your own. I received no monetary compensation for this publication.
Posted by sarh s at 12:01 AM