About Sabrina & NerdStyle
Sabrina is the single mother to a sweet little boy and Army Reserves Medic behind NerdStyle. She also works nights at a Juvenile Behavior Therapy Placement Center as a Youth Counselor. She started NerdStyle working nights with a lot of time to kill, but nothing to do. A friend of Sabrina's wanted a pair of Doctor Who shoes, but after searching and not finding anything under $90 she decided, "Hey, I can make those. Not only can I make those, I can make them better and cheaper, and sparklier!". Then she thought, "Why not offer these sparkly shoes to everyone?! And offer them at a better price!". That's when NerdStyle started and Sabrina's imagination went wild designing all of the nerdy things that her and so many more awesome people, just like her love! 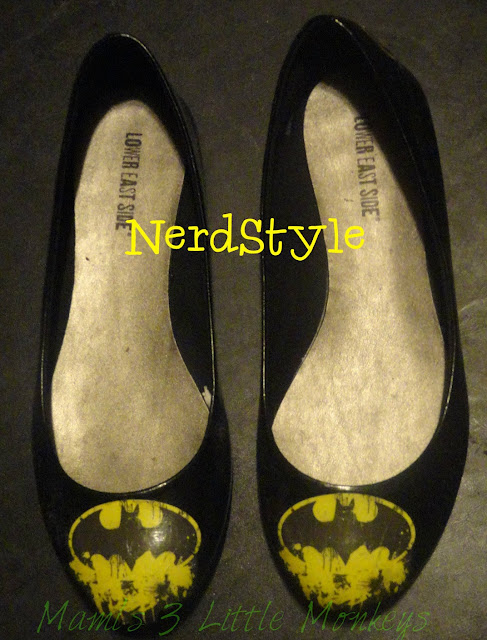 Batman Flats?! Yes, definitely Batman flats! How amazing, hey?! I've never seen Batman flats before and was amazed to even find them!! These awesome Batman flats (ARV$33) have the Bat Symbol on the front, which is done in a graffiti type of style and a Bat Symbol on the back in a more traditional style. They have a smooth black finish and you can even customize them or add glitter!

Not only are these flats awesome because they are Batman flats, but Sabrina also carries her flats in wides! I was so nervous that I'd be out of an awesome pair of flats because I have wide feet, but she had wides and they fit! I've tried many different flats in wides and they never fit comfortably, however the flats from Sabrina are definitely comfortable and I could probably even wear them all day long!

I usually wear mostly black, I'm quite the Tom Boy so bright girly colors just aren't me and flats are usually a no go for me as well, but of course I could not pass up a pair of Batman flats. Since I usually wear black these will go with nearly everything I wear! I also really dislike wearing shoes, but most of all socks and I don't like to show my feet/toes. Sandles are often to frilly and girly for me so it's either flip flops, flats or barefoot which is my absolute favorite, but unfortunately I can not go everywhere barefoot. These flats are great for me as I can carry them to the car and put them on before going into a store or restaurant and even comfortable enough for me to actually slip on before heading out the door.

More often then not, unfortunately, flats and other dressy or nice shoes start to dig into my skin leaving sore red marks and I'm just not the type of girl that believes "pain is beauty". The fact that these flats fit me comfortable and left behind no red marks or soreness left a little hope for me to still be able to add that small touch of girliness when going out.

NerdStyle offers a variety of themes for her awesome and unique nerdy flats as well as offering them in a wide range of sizes including regular and wide widths. All that and reasonable prices? Didn't think it was possible huh?!

GIVEAWAY!
One lucky reader will have a chance at winning their own NerdStyle flats in the Christmas in July Giveaway Hop HERE! This giveaway will be open to US residents, whom are at least 18 years of age at time of entrance. Giveaway will run from July 10th through July 17th.
Good luck!

Are you a Batman fan? If so, what is your favorite Batman movie?
Not a Batman fan? Really? Just kidding, which NerdStyle flats would you choose if you won?

Disclosure: I received the above product(s) in exchange for my honest review, all opinions and experiences are my own and may differ from those of your own. I received no monetary compensation for this post.
Posted by sarh s at 1:47 AM