Adrianna is the momma, owner, maker, designer and photographer behind AdriannaKnits. She is the mom to two little boys and a daughter, her oldest is 7 years old. She is a work at home mom who learned the basics of crocheting from her mom at only three years old! Her grandmother was a first generation Italian immigrant whom immigrated to the US with her trade being a seamstress and her grandmother taught her how to knit and the basics of sewing. Adrianna began designing her own patterns in 2009 after her daughter was born as she found patterns boring. She also started making and trying to sell cloth diapers but found the market to be slim to none back then and extremely expensive to get into and put it on the back burner for a while. Her sister in law urged her to open an Etsy shop so she did so in 2010. You can read a little more about Adrianna and her oldest child's special needs in her About Me section. 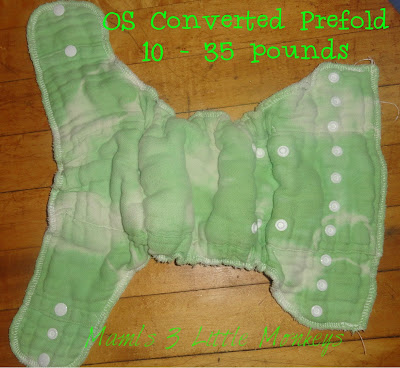 This awesome OS Converted Prefold Fitted ($10.95ARV) is an unbleached Indian prefold diaper that is tied and died, hand cut and surged. The wing span of this diaper is 17.5" and has elastic through the legs and back waist, making it a true fitted diaper. It will fit from approximately 10 to 35 pounds with a 2 by 3 rise to gain the best fit for your baby. It is also available in sizes if you prefer those. 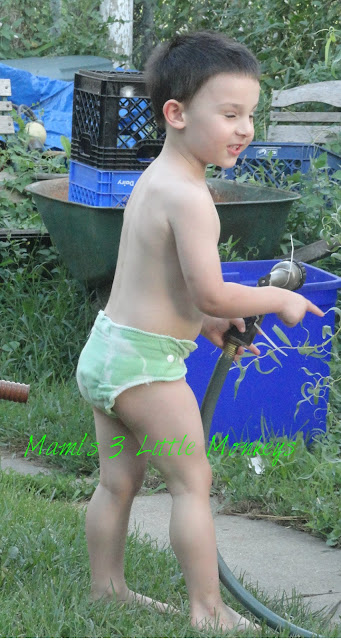 Cade is my silly goof 3 year old son who is 39 pounds. This diaper fits him with the rise snapped down and the wings on the last two belly snaps. He was able to wear this diaper comfortably and even ran around outside in it, he does definitely let me know if and when a diaper hurts him and he didn't have a single complaint. With most non converted prefolds I have a rough time getting the prefold around his waist with enough padding from the prefold over his hips so that the Snappi doesn't dig into him, so glad I found this converted prefold for ease of use with him. It is so much quicker and easier to just snap it onto a busy toddler who doesn't want to hold still for two seconds. No folding and stuffing, no worrying about the Snappi digging into to his hips or anywhere else.

I also put this diaper on Ezio who is 19 months old and 26 pounds, the rise snaps were closed all the way and the wings were snapped at the middle. This diaper does also have a cross over snap for the smaller babes. Unfortunately, my camera was dead when Ezio had this diaper on so I will need to update with a photo of him wearing it as well.

I was able to achieve a great fit with this diaper on both of my boys. There was no irritation from the tie dye and both of my boys have sensitive skin and eczema. There was also no irritation from the gentle elastic in the legs and waist and allowed for a great tension along the thighs holding any solids or not so solids inside of the diaper, unlike non converted prefolds which for me always let the solids escape making the cover dirty and having to be washed as well.

GIVEAWAY
One lucky reader will have their choice of a sized or one sized converted prefold fitted diaper! This giveaway will end on August 14th at 11:59pm cst. Winner will be chosen at random and email in which the winner will have 48 hours to respond or a new winner will be chosen. All of the winner's entries will be verified. Enter for your chance to win through the Giveaway Tools entry form below.
Good Luck!

Entry-Form
Disclosure: I received the above product in exchange for my honest review, all opinions and experiences are my own and may differ from those of your own. I received no monetary compensation for this publication.
Posted by sarh s at 7:02 PM