Action Baby Carrier started out with mei tai style baby carriers that were called Action Mom Carriers back in 2006 when a few family members of Angela Alexander, the founder, were having babies. Angela didn't want to do the typical purchase of baby gifts, but instead wanted to be a bit creative so she figured she could sew a few baby carriers. The first carrier she sewed took 9 hours! Wow! As she became better at sewing the carriers, especially after sewing two more for her cousin who was expecting twins, she was able to cut down the process time by quite a bit.

Although she tried to hold her own, her husband how is a typical math wiz watched over her and eventually stepped in as he sees systems, patterns and "time saving techniques" in every process. He was able to cut the process down to one and a half hours! I didn't think that would be possible! Angela had no idea how her husband did so, but then she had the brilliant idea to post a quick question on a babywearing forum... "anyone want to buy a carrier?" and bam, she had 35 orders over night and there she had it, a business!

So how did she transition from making mei tai style carrier to buckle carriers? It was the demand of her Action Mom Carrier fans, however it was protested on the manufacturing end for a while. Action Baby Carriers were of course an instant hit for many reasons!
Seaside Toddler Carrier 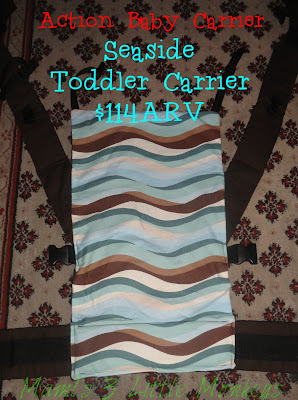 The Seaside Carrier has a beautiful print of waves that are different shades of blues and browns and is popular amongst those who love the water and being outdoors. The straps and inside of the carrier are brown. It is a great gender neutral carrier, perfect for moms and dads as well as baby girls and boys!

I received the toddler carrier as I have two of them weighing 26 and 39 pounds and this carrier is recommended for babies/toddlers weighing 15 to 45 pounds. This carrier has a seat base of 19 inches across, the carrier is 3 inches taller in the body then the standard Action Baby Carrier and also offers an inch longer hood and 2 inch smaller shoulder webbing. The smaller webbing is because the toddler carriers are mostly used for back carriers and with this smaller shoulder webbing you can get a tighter fit. 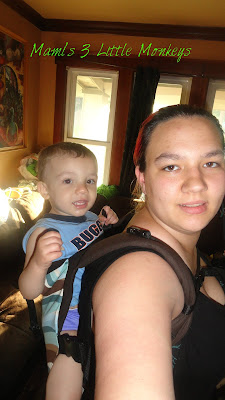 We love our Action Toddler Carrier!! Wrapping is not at all a strong suit of mine, I am so glad there are beautiful alternative options. 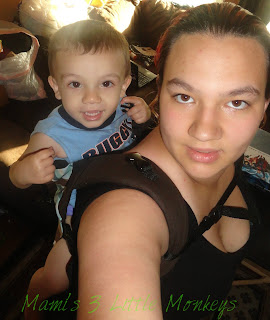 It's pretty obvious that he loves it! This carrier did not leave any red marks on him, unlike slings we've tried in the past. Tossing him on my back is the only way for me to get things done around the house, unless I were to wait til he takes his nap, however Dan comes home for lunch everyday and nap time is not until after Dan leaves for work. I can now get lunch made and have a hot meal waiting for him when he gets home, all thanks to Action Toddler Carrier!! Ezio is a monster and gets from one thing he shouldn't to the next before you can even clean up the first thing he has gotten into. Very exhausting! He loves to be in the carrier and I usually have him in there like I said to make lunch for Dan and also to help Ezio wind down just before nap time. It helps him relax a bit and just hang out. Ezio is a cuddle monster, so this is perfect as my hands are still free allowing me to get so much done. 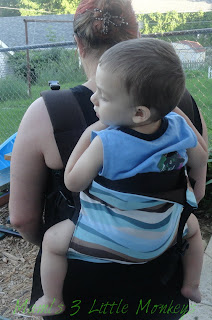 To me, Ezio is a weird child, even when we are outside he is perfectly content being in the carrier! Look at all those toys in the photo below, one would think he'd prefer to play and run around. If you bring out the hose or the pool then that is a whole different story, he goes crazy until I take him out. 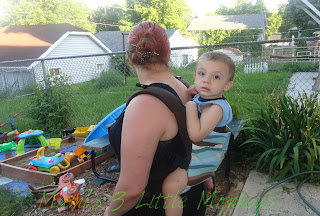 I've worn Ezio in this carrier in the grocery store, to the Fourth of July parade and fireworks and just around the house. Why would I wear him on my back through the grocery store instead of placing him in the cart? I'm not a germ freak, but carts are very gross! My main reason however, is because Ezio is a little Houdini and no matter how we strap him in he manages to get out and stand up int he cart and try to climb out.. all while we are right there and may turn for two seconds to grab something off the shelf. Yep, that fast, so it's easier and not to mention safer to just put him in the carrier. It does not limit me at all from doing anything at the store! I can still bend down to the bottom shelf, reach the top shelf, load and unload the cart and vehicle, etc. Only tricky thing is, making sure his little sticky fingers are no wheres near either row of shelves, depending on his mood this can be quite the challenge!
So why not just put him in the stroller for the Fourth of July parade and fireworks? Wouldn't have been so bad for the walk to the parade, however during most of the parade he was sitting on great grandma's lap any how. However, after the parade we had to walk through a very hilly park to get Jedilynn as she walked in the parade with her Girl Scout Troop. If I didn't have him on my back it would have been such a huge pain and taken so much longer to push a stroller either along the paths which wind in the opposite directions of where we needed to go, or attempt to push the stroller through random holes and up large hills. The stroller would have been impossible! There were quite a few other families trying to get strollers through the park and I just strolled right through with great ease! With Mr. Houdini who can get out of the stroller, which has a 5 pt harness, I'd much prefer to put him in the carrier on my back for fireworks. It's always so darn and very crowded, if he were to get away with in the blink of an eye, he would be lost and I can't even begin to imagine how I would be able to find him. Plus, we walked to the field where we watched the fireworks and the side walks were crowded like never before so there was no way I would have been able to easily get a double stroller through the crowd and field.

Action Toddler Carrier has helped to make daily activities so much easier! I only have a slight issue... I apparently have T-Rex arms and have a hard time fastening the buckle on my own, but I manage.

Connect with Action Baby Carrier
Website
Facebook
Google+ +Action Baby Carriers
GIVEAWAY!
One lucky reader will win their own Action Baby or Toddler Carrier with a value of $98-$114!
This giveaway is open Worldwide to entrants whom are at least 18 years of age at the time of entrance. This event will run from July 18th through August 1st. Winner will be chosen at random via the Rafflecopter form, notified by email and will have 48 hours to respond to the email or a new winner will be chosen.
Good Luck!

Disclosure: I received the above product in exchange for my honest review, all opinions and experiences are my own and may differ from those of your own. I received no monetary compensation for this publications.
Posted by sarh s at 3:46 PM