Recycled Rumps are affordable and adorable cloth diapers that are handmade with love by a WAHM of 3, soon to be 4. She has created her own pattern which has been through lots of trial and error to perfect it. Recycled Rumps has pockets, fitteds and covers which are all specially designed with their own unique patterns. The fitteds from Recycled Rumps were designed to be a trim, but functional diaper with long wings for that perfect fit which also have lots of snaps to prevent the dreadful wing drooping. The pockets have a wider pocket area which help to fit more stuffing or better known as absorbency, the pockets also have a double row of snaps to prevent the wing drooping. As for the covers, they have leg gussets and a wide bum area made to fit over the fluffiest fitteds! Score!! Do the diapers sound amazing yet? In addition to the great diapers and covers, Recycled Rumps faithfully donates 10% of sales on items $10+ purchased, quarterly. So you get an awesome diaper, help support a great WAHM AND you help Recycled Rumps donate to a charity. Perfect!

Hybrid Fitted
We received this awesome hybrid fitted diaper from Recycled Rumps in a lycra print she has called/labeled as Tattooed ($22ARV). I absolutely love the print, but that's not even close to all that I love about this diaper nor is it the thing I love most about it anymore! When I first seen it, I just loved the print and knew nothing about the amazing absorbency nor the uber soft and plushness of this diaper. 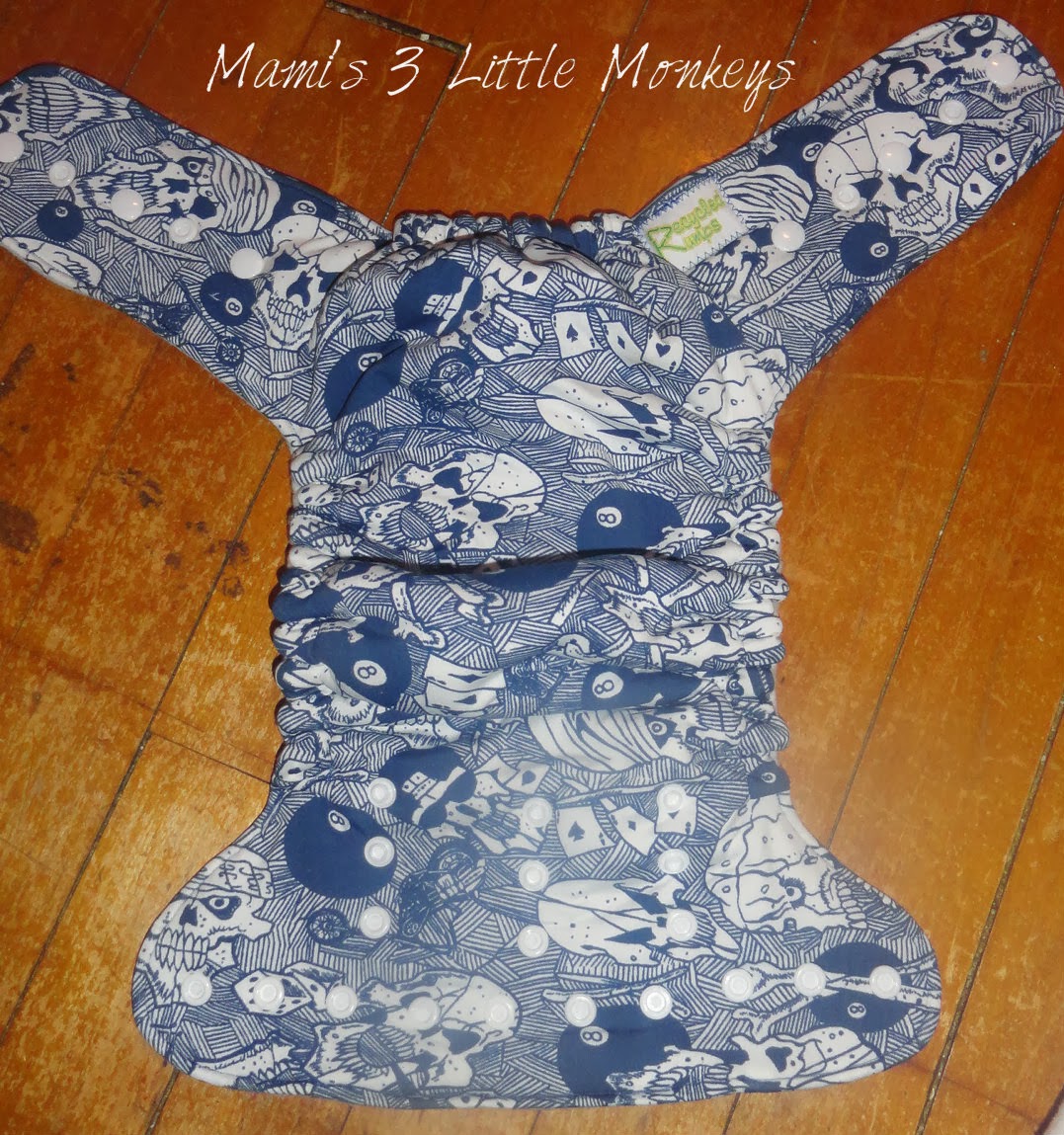 First things first, what this diaper is made of... the outer layer is a lycra knit. The inner lining is microchamois, which for those who are unfamiliar with this fabric as was I... it is an ultra-soft pill resistant lightweight fleece, like microfleece, but better. It is so very soft and silky smooth! I think I have become addicted to this fabric just from this diaper... anyhow back to the materials of the diaper! Each fitted comes with a trifold insert, which could be zorb or bamboo. We received the HOBF trifold insert which is topped with a layer of microchamois and a smaller booster or small insert that is also topped with microchamois. The photo below is the trifold insert and the booster/small insert. What I like most about the booster/small insert is that it is perfect for both boys and girls and helps you customize the absorbency a bit as you can place it further in the front for boys or in the middle for girls to maximize the absorbency in your babe's wet zone. 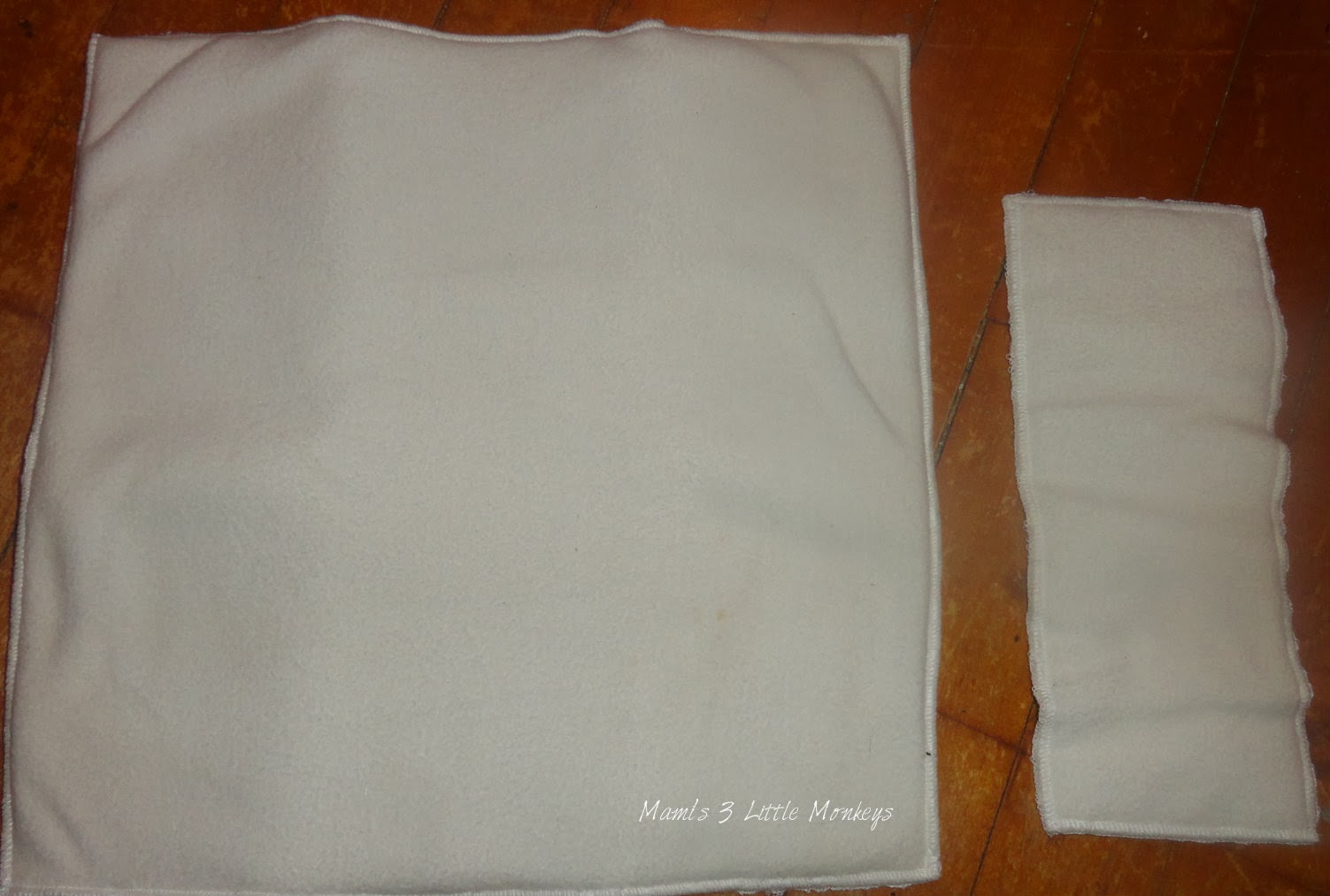 I could feel the plushness and what had to be absolutely amazing absorbency right away in this diaper! So I put it to the ultimate test. First and foremost it had to fit my 40 pound 3.5 year old and it DID! Perfectly with TONS of room to grow and you can see in the far right photo below I even used a cross over snap on the wings. Then came the even harder test for this diaper... Cade had to be able to wear this diaper through out the entire night and wake up unsoaked. Seriously, momma is tired of washing his bedding daily or near to it. 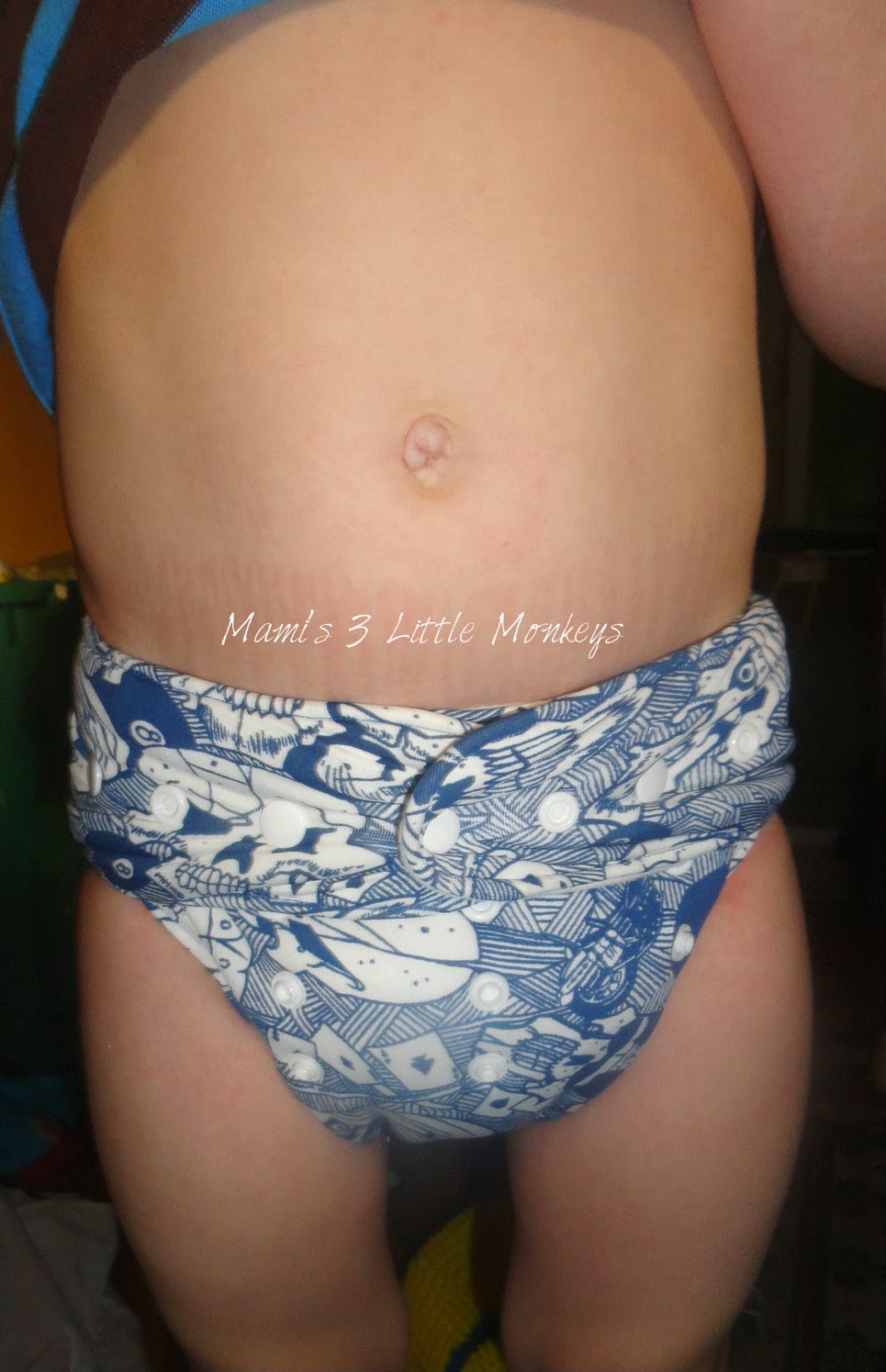 Just as I had thought, this diaper held up amazingly well for Cade over night! In fact the outer layer nor the cover I used over this fitted were even damp! So after it came back out of the wash, instead of trying it on Ezio as I normally would, I just had to try this fitted again on Cade, but this time I put it on him at nap time with no cover and again he woke up with out a single leak. He usually takes about a 3 hours nap, he doesn't sleep the whole time, but we use this time as a quiet rest time while Ezio is napping... who actually sleeps the full 3 hours. So, Cade was awake for quite a while out of those 3 hours and he had a cup of juice just before laying down. I was so pleased with both results and I did venture and get gutsy and put this fitted on him for bedtime without a cover at all... eek, why would I do such a thing?! Because I knew just how awesome this fitted diaper is! He woke up that morning dry as well.

I was so pleased that this diaper not only fit Cade great, but also held up over night without a cover! That is pretty much unheard of! I absolutely love fitted diapers, but I'm often sad when it gets to be nap or bedtime or we have to run somewhere and I have to put a cover over it so for him to be able to sleep in the diaper without a cover I am pretty sure we could run a quick errand in this fitted and not have a leak, but compression leaks are kind of tricky.

I did try this fitted diaper on Ezio... once... because I love it on Cade and he has less diapers, but the same thing went for Ezio when he got to wear it. No leaks and he wore it over night. I discovered in the morning that the inner layer of the diaper was actually dry and I totally could have put a prefold or something else inside of it just to enjoy the awesome print a bit longer before it went into the pail, however I did not. When I used this diaper on Ezio, I did snap down the rise and I also used the cross over tabs like I did with Cade. I probably could have closed the cross over tabs one more in, but I didn't want to make it too tight as he was wearing it to bed and I know I don't like anything to be tight on me when I sleep.

If you already have not discovered it... we simply love this diaper! Every last thing about it!

Giveaway!
Recycled Rumps would like to giveaway an item of one winner's choice! You could choose from a fitted, hybrid fitted, pocket, cover, etc. Your choice! This giveaway is open to US residents whom are at least 18 yrs of age with a valid US address (no PO Box) and it will end on Monday, February 24th at 11:59pm CST. For your chance to win, simply complete the entries in the Giveaway Tools entry form below. You can do one, all or any number in between, the more you complete the better your odds of winning will be. One winner will be chosen at random via the GT form, winner will be notified after all entries have been verified and will have 48 hours in which to respond or a new winner will be chosen.
Good Luck!

Disclosure: I received the above product in exchange for my honest review, all opinions and experiences are 100% my own and may differ from those of your own. I hold no responsibility for the fulfillment or shipment in any way for this prize.
Posted by sarh s at 1:03 AM