Make Your Own Cloth Diaper & Laundry Detergent {Only 2 ingredients!} 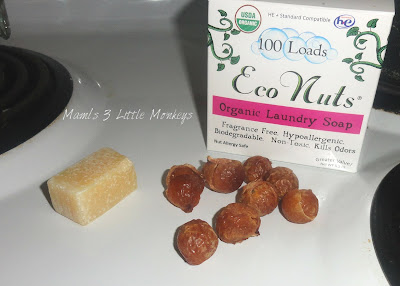 We recently ran out of the cloth diaper detergent that I was using on our diapers. Both of my boys have sensitive skin and eczema, making it very difficult to find something that their bums will do okay with. There are only 3 cloth diaper safe detergents I can use on their cloth diapers, Eco Nuts being one of them, however I wish the Eco Nuts would leave a little better smell to the diapers. They don't smell stinky or dirty, they do smell clean, but a plain natural clean and I'm not at all used to that.

I've been thinking about making my Eco Nuts into a liquid form and seeing if that would help the smell a little more. My washer does not get all that hot and you need hot water to release the saponin (the soap) from the Eco Nuts. While visiting the BunchaFarmers Facebook Group I can across this recipe for a concoction of Eco Nuts liquid soap and BunchaFarmers Stain Stick Remover, so I thought I'd give it a shot! 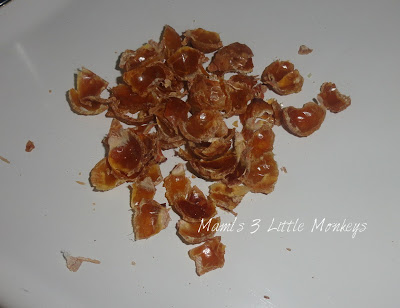 You take about 6-8 Eco Nuts, break them up into smaller pieces so that more of the saponin can be released easier. 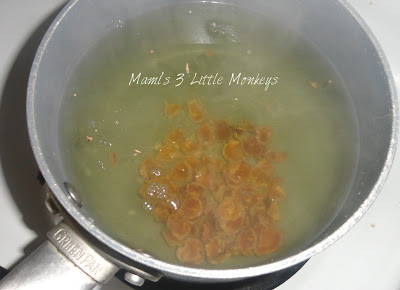 Put them in a pot of boiling water, reduce heat a bit to avoid over flow (the saponin in the soap nuts can cause quite the fierce boil over). 'Cook' for about one to one and a half hours. 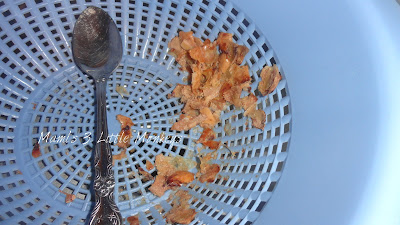 After 'cooking' your Eco Nuts, strain the soap you've just made into another pot. After I strained all of the Eco Nut shells out I took a spoon and pressed it against the Eco Nuts to get the remaining saponin out. 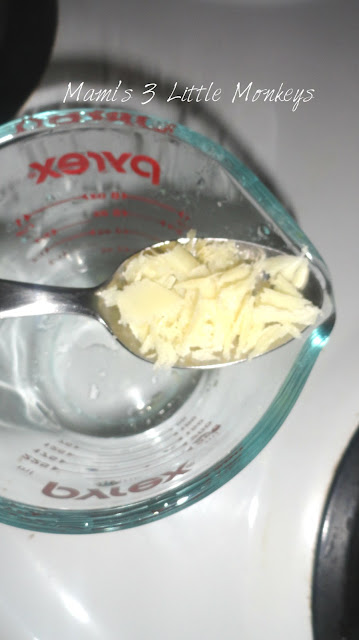 While I waited for the Eco Nuts, I grated about 5 tablespoons of the BunchaFarmers Stain Stick. I don't have a grater, but a butter knife worked just as well! 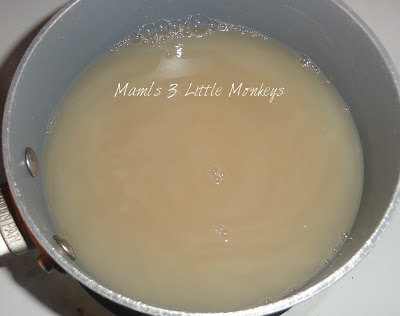 After draining the Eco Nuts, I returned the liquid to the pot and back to the stove. I added my grated Buncha Farmers Stain Stick and stirred it while heating it to help melt it. In the photo above the milky looking liquid is the melted Buncha Farmers and the darker liquid is the Eco Nuts saponin. It does mix together quite well, I mixed it better after taking the above photo.

I let the concoction cool for a bit and then filled three ice cube trays with it, two of my trays were quite small so I had a bit left over. Just pop them into the freezer and once they have become frozen all the way through you just pop them out into a zip lock baggy and place back in the freezer. I found that these melt pretty quickly. I actually had to put the two smaller ice cube trays back in the freezer to refreeze them as they melted while I was popping out the larger tray. This recipe makes enough for about 21-32 loads using only 6-8 Eco Nuts. A medium box of Eco Nuts is only $9.99 for 100 loads, when using Eco Nuts whole you get about 10 washes out of them, making a liquid soap out of them with the bunchafarmers DOUBLES the number of loads you can do with the same about of Eco Nuts. A stick of BunchaFarmers is only $4.42 and when grated a stick equals 17 tbsp, this recipe only calls for about 4-5tbsp equaling about 4 loads if my math is correct. I know there are much cheaper homemade CD safe detergents, however we unfortunately can not use those with the boys skin problems and this one works great!

I put 3-4 of the smaller or 2 of the larger ones into a cup to take them down to the basement other wise they melt in my hand on the way down there and I'm on the first floor. Just toss them in the wash and run your hot water! The amount of ice cubes you would need may depend on your water type, we live in the city, have soft water and we're only about 5 minutes away from the water sanitation plant. I also used up the liquid I had left, but didn't have enough ice cube trays for, I used about 1/3 of a cup of the liquid per load. You can keep the liquid in the fridge, but I would make a smaller batch and make sure it has an 'air tight' sealed lid. I don't think it would really last much more then about a week in the fridge, however depending on how often you do laundry you may use it up before it goes bad. I do at least 1-2 loads of cloth diapers in a single day on top of all the other loads of laundry for a family of five. I probably could have gotten away with putting the liquid in the fridge, however with two toddlers who think they should be in the fridge, I wanted to avoid them opening and spilling it all over.

Do you make your own laundry detergent or cloth diaper safe detergent? Do you think you might try out this recipe?

Disclosure: This is not my recipe, I used the recipe on BunchaFarmers, Inc. Facebook Group from another BunchaFarmers user. I was not compensated for this post, I just wanted to share it with all of you as I have made it, use it and like it. Enjoy!
Posted by sarh s at 3:17 PM