The BubbleBum was created by Grainne Kelly who is a Safekids USA Certified CPST from Northern Ireland. She worked closely with her own two children as well as those from local schools to develop a booster seat that was more 'big kid' then a "baby seat" as well as a booster that was not quite so conventional and rigid of a design. The children helped with naming the BubbleBum as well as choosing the funky colors and design. The children's reasons for liking the Bubblebum compared to existing rigid boosters are simply because they found it easier to carry as it is lightweight and compact, they were not embarrassed to bring it to school in their back packs because it was cool, it was more comfortable then the conventional rigid options on the market and they also liked that fact that it was for "big kids". 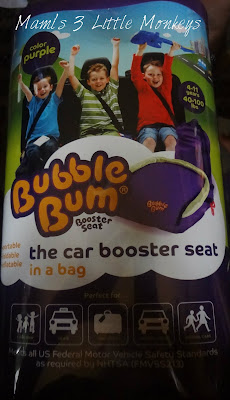 The BubbleBum ($39.99ARV) is a great booster seat for busy families. It weighs less then half a pound! You can easily deflate and fold it up to conveniently take it on the go, put it in a backpack or other bags and tote bags if you drop your child off at school and someone else picks them. The BubbleBum takes less then 20 seconds to inflate by mouth, may take a child a little longer to inflate this booster seat though they can most definitely still do so. When it is deflated it folds flat for convenience and it comes with a stretchy bag for easy carrying. The BubbleBum is much more comfortable then conventional booster seats made of hard plastics and comes in two great colors of black and purple. 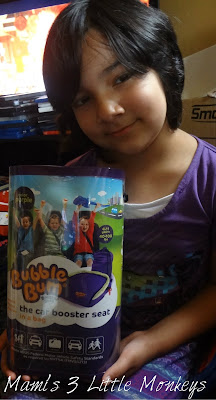 I was a little worried that Jedilynn would think this was a silly thing. However she loved it and even though we were in for the night she wanted to try it out immediately! She instead sat on it around the house until great grandma came to pick her up the next and then she was so excited to use it. I only had to show her how to put the seat belt in the belt positioners once and she has had it down pat ever since. This is a great booster seat for her to take with her all through out the summer as she is off with family members enjoying her summer and in many different vehicles. A few family members are quite protective of their vehicles and with the hard plastic boosters Jedilynn was not allowed to take her old booster seats in and out of these vehicles in case she banged it against the side, to prevent accidental scratches and dings. Jedilynn is very independent so being able to take her booster seat from one vehicle to the next is definitely a plus for her.

Jedilynn is 7 years old, about 80 pounds and just under 5ft tall. The top of her head comes up to my shoulder and I am 5'6/7". The BubbleBum allows the lap and shoulder belts to lay across her body at the appropriate levels/angles, such as the lap belt laying across her lap instead of being against her stomach and the shoulder belt going across her shoulder instead of against her head. As she has been gone nearly all summer long I have yet to get a picture of her in a vehicle using her BubbleBum, but I will definitely be sure to get a picture to upload hopefully soon! She starts school in exactly one week (Sept. 3rd) so it shouldn't be too much longer before I see her for more then maybe an hour.

The BubbleBum is for children from the age of 4 to 11, weighing from 40 to 100 pounds and with a height up to 57" (4.75ft). So what is the BubbleBum made of that it is safe to use an inflatable booster seat? The BubbleBum is made with a durable material that is similar to what they use to make life vests and other life saving products it has an inside air chamber cushion of memory foam that adds stability and comfort as well as a cover around the air cushion webbing with belt positioning clips and energy absorbing materials.

Booster Seats should only be used with a 3 point seat belt, this is a seat belt with a shoulder belt as well as the lap belt.It is proven that children in booster seats have approximately half the risk of injury as children without a booster seat and in a seat belt alone. Abdominal injuries are the second most common injury with head injuries being the most common, abdominal injuries for belted children are as a result of "seat-belt syndrome" injuries.

GIVEAWAY!
One lucky reader will win a BubbleBum ($39.99ARV)! Open to US residents whom are at least 18 years of age at time of entrance, this giveaway will close on Sept. 10th, 2013. The winner will be chosen at random and emailed with 48 hours to respond or a new winner will be chosen. All entries are optional, please be courteous and follow our sponsor via at least one social media site. Good Luck!
Entry-Form
Disclosure: I received the above product in exchange for my honest review, all opinions and experiences are my own and may differ from those of your own. I received no monetary compensation for this publication.
Posted by sarh s at 8:27 PM