Disclosure: I received these products in exchange for my honest review. All opinions and experiences are our own and may differ from those of your own.

The Honest Kitchen
The Honest Kitchen began back in 2002 when Lucy was making her first dog, Mosi fresh food. It was quite messy in her kitchen, but she didn't want that to stop her from making and feeding her dog the healthy food made of whole, colorful and healthy ingredients.  Dehydration was the answer to a cleaner kitchen. She started receiving samples from raw ingredients suppliers, which were blended in specific recipes to create Verve.

Soon Mosi's dog park friends wanted to try Verve and soon a local store wanted to sell it! After certifications from their ingredients suppliers they were manufacturing this gourmet pet food made with ingredients that people could eat! Their first batch was 2,000 pounds and was selling out quickly! Each batch to follow was getting a little bigger and bigger.
Check out more of the History of The Honest Kitchen. Pro Bloom digestive enzymes for dogs and cats is a human-grade and made in the USA from pasture-raised, free-ranging goat's milk in the Pacific Northwest. It is free of pesticides, herbicides, growth hormones and antibiotics.  Can be served alone, over hard food or mixed with Grace Cat Food.

I gave our momma cat some Pro Bloom while she was nursing her newborn kittens and she loved it. Once the kittens were drinking water on their own then I introduced them to Pro Bloom. I did not want to over step momma cat's nursing abilities or deter them from nursing from mom. The kittens absolutely LOVE the Pro Bloom! I mix it with warm water and the warm goat's milk sits nicely in their little tummies. They used to sleep after drinking Pro Bloom, now that they are older that no longer fall asleep shortly after drinking it. Sort of like a human infant falling asleep with warm milk/formula/breastmilk in their little tummies. 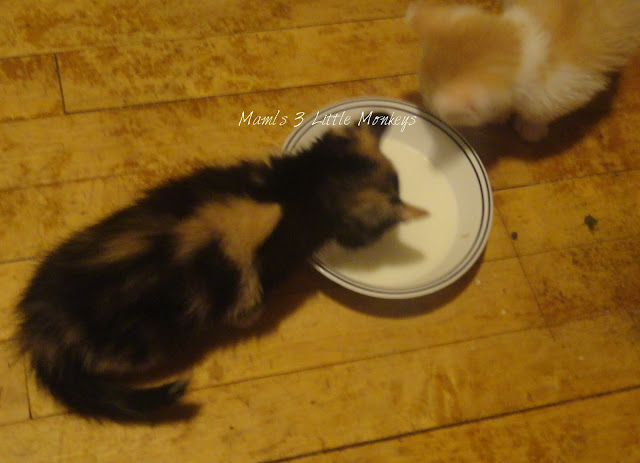 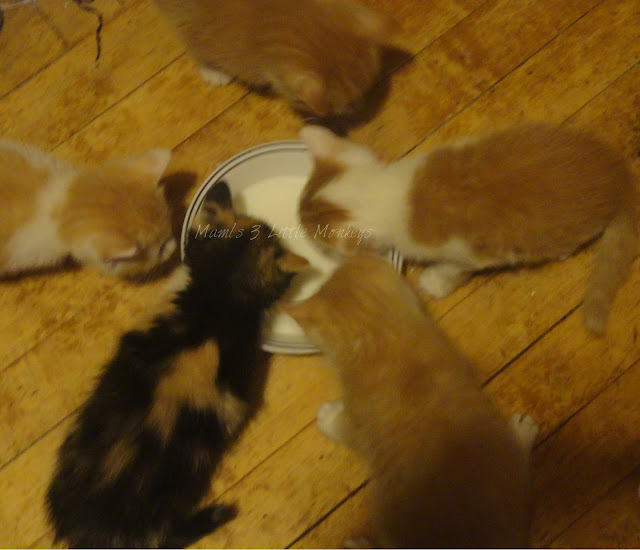 And finally all 6 curious kittens filling their bellies with nutritious Pro Bloom! 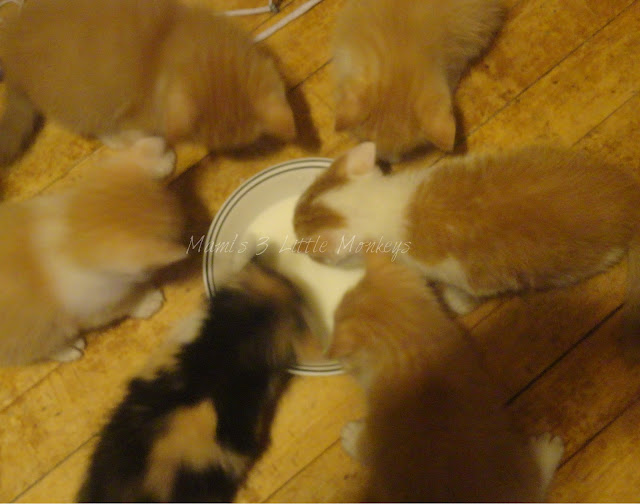 I love how all six, four week old kittens were able to stand around a normal cereal bowl and drink their Pro Bloom from The Honest Kitchen! 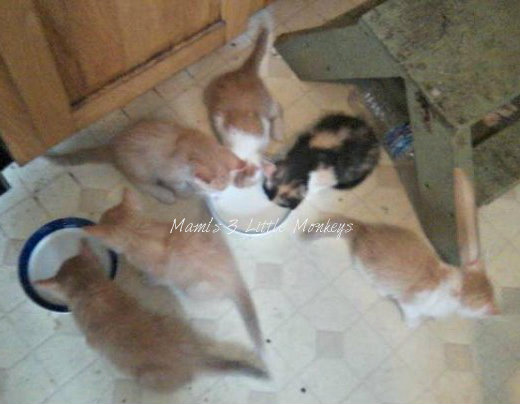 Even at eight weeks old they still love their Pro Bloom. The bowl on the left is water and the bowl on the right is Pro Bloom Goat's Milk, all six started out drinking milk and a few followed it up with water. They all approve! Also, after the kittens leave the bowl of goat's milk, if I am not looking, I can catch the older cats taking a drink of Pro Bloom. They also like it, but they allow the kittens to drink first. 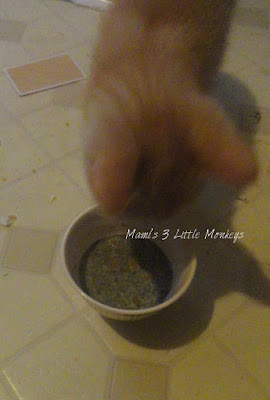 Miss Copy Cat (she is a darker version of one of her sisters) was the first of the kittens to come sniff out the Grace Cat Food. She eating it right away. Soon after I gathered up the other three kittens... 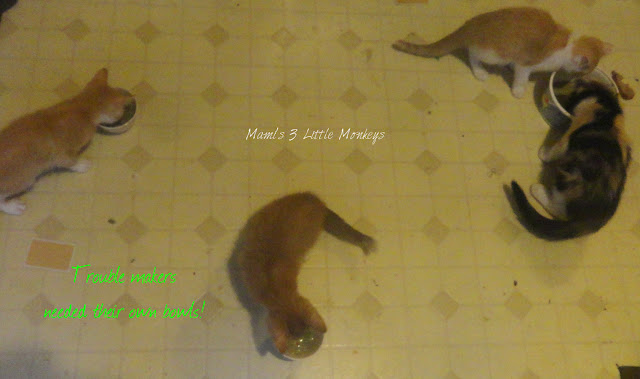 As you can tell, we have two "trouble makers" who aren't too keen on sharing food other than their dry kitten food, so they have their own bowls. They all love the Grace Cat Food! It's super easy to mix up a batch for these four kittens and even when we still had all six from the litter. Since they are no more than probably 3 pounds each, I mixed up a cup of food for the four kittens. Per the box for a 1-5 pound kitten they should get 1/3 to 1/2 a cup of Grace Cat Food. The small white bowls that the two trouble makers are eating from are actually my measuring cups which are 1 cup filled to the rim. I mixed the food in a cool whip container and then poured it into separate bowls for the kittens. They did not fully finish the bowls, although sometimes they do. They also have dry kitten food available for them at all times. 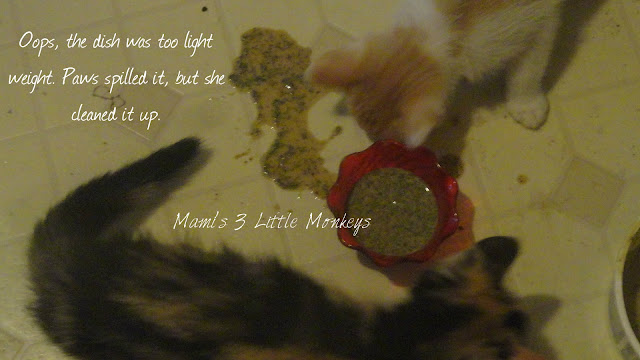 Miss Paws (she's very pawsy, smacks stuff and people a lot) of course dumped her bowl of food. The measuring cups the two trouble makers were eating from have little grippers on the bottom, but not the red bowl she had. She cleaned it up though, she didn't want her tasty new food to go to waste. 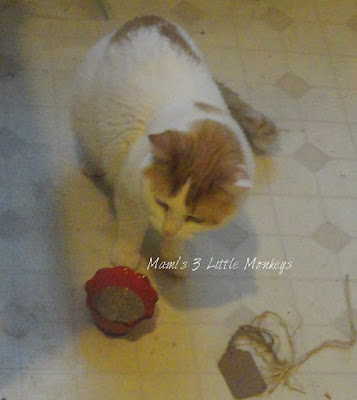 Unfortunately, the larger cats (Sunshine-daddy, pictured above)don't seem to want the Grace Cat Food. I wouldn't say they don't like it as they really haven't tried it! However, they are very polite as they allow the kittens to eat before they eat, which is absolutely amazing to me! Plus, momma cat likes to try and steal our food while she's pregnant and nursing so she often gets scolded when going for food in the kitchen. So I suppose for her, she's unsure if it's okay. I keep trying as I know this would be great for her. Maybe eventually she'll take to it. There will be no more babies, so I'm sure she'll take to this once she's no longer nursing any kittens, but it'll still be just as good for her.

Both products are a hit here! I definitely approve of these products for my kitties. Oh and I'm not a fan of the smell of most commercial pet foods, especially not moist/wet foods. They kind of make my stomach churn a bit, but not The Honest Kitchen's products! So that was another plus for me.