In the fall of 1999 a friend approached Daphne Taylor and was desperate for help in creating good gluten free and allergen free foods for herself as well as her preschool aged son so she started 'experimenting'. Daphne's creation had to be free of gluten, corn, soy, potato, dairy, casein, peanuts and tree nuts in order to meet her friend's dietary restrictions, what a challenge! Since Daphne is a chocolate lover she started with brownies. She made changes to a recipe she found on the back of a bag of unsweetened chocolate chips, with these changes she made her perfect first brownies meeting the demands of her friend's diet. Read more about the history of Namaste Foods here. 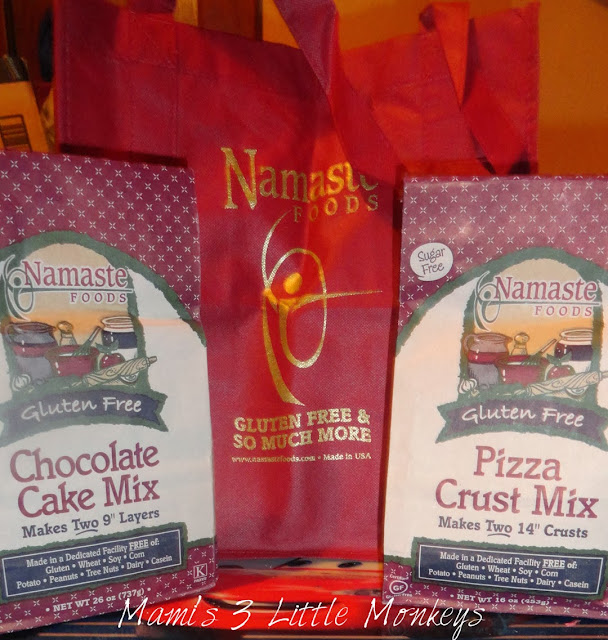 We received a gluten-free Pizza Crust Mix ($4.89ARV) that makes two 14" crusts as well as a gluten-free Chocolate Cake Mix ($5.95ARV) that makes two 9" layer cakes. Both of these mixes as well as the rest of Namaste's Foods are free of gluten, wheat, soy, corn, potato, peanuts, tree nuts, dairy and casein, plus they are non-GMO and preservative free not to mention all natural. 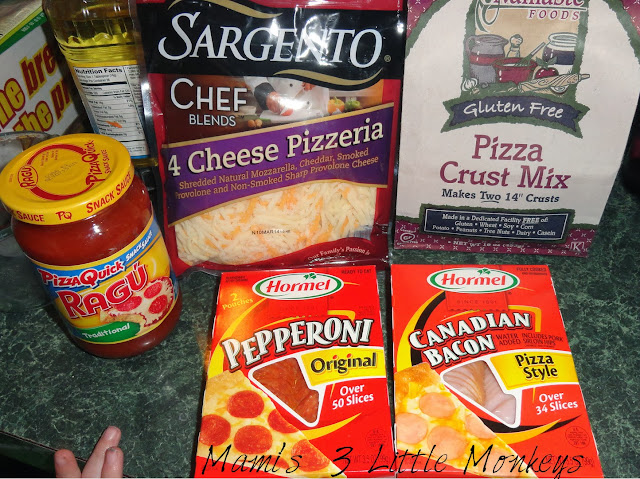 We made a pizza with the Pizza Crust Mix, but have not yet made a Chocolate Cake. As some of you may know Ezio, my 2 year old is allergic to peanuts, chocolate (or possibly the egg they now use in chocolate), eggs and melon. We also believe he may be allergic to wheat, but we have been keeping a food log and will do more food allergy testing at the end of January. So for us, the Pizza Crust is perfect! It does not contain egg nor do you need to make the crust with egg! As we normally do not eat everything gluten-free I tried my best to keep all ingredients used for this pizza gluten-free. If you make gluten-free foods you may know that both of the Hormel meats are gluten-free. As for the Sargento cheese and Ragu pizza sauce the internet is indecisive on whether they are gluten-free or not, their packaging does not state whether they are or not and I did find that the Sargento All Natural cheese is gluten-free (I didn't see this when at the store). So, anyhow! 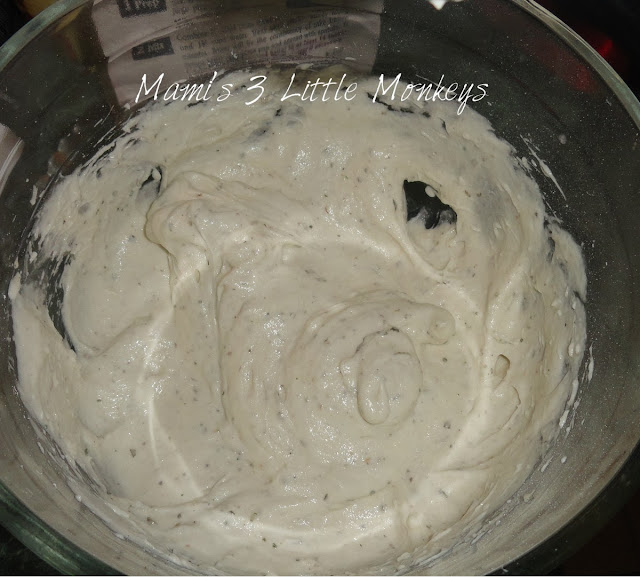 The pizza crust is super easy to make! You just measure out 2 cups of the mix, add some oil and water and mix it all up!! The dough is very moist and sticky, unlike non gluten-free dough which is full of flour and you can spin. But, that is okay, I shouldn't try to spin any dough! Once you've mixed up your pizza crust and have it to a doughy consistence then you evenly add it to your pizza pan. The bag it comes in recommends a 14" pan and to spread it no more then 1/4" thick. I don't have any pizza pans, but I do have a cookie sheet! 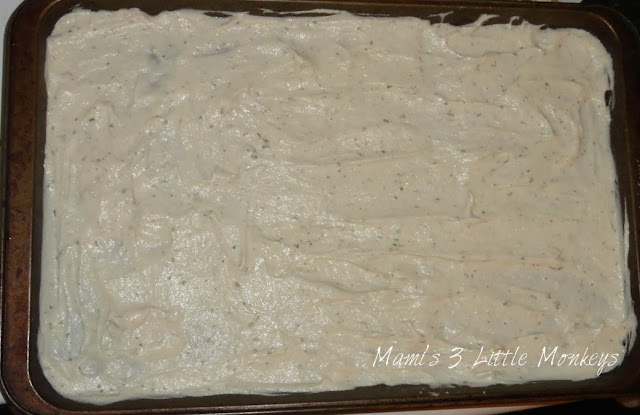 Spread the dough across the whole pan, phew! I had enough dough! I wasn't sure on the size of my cookie sheet and of course I didn't Google the measurements of a standard cookie sheet. But do you think it worked? I will admit, I was expecting me to have forgotten something or some how have horrible messed it up! Kind of like when I tried to make homemade, baked toddler biscuits... lets just say I was done making dough of any kind and baking for a little while after that. 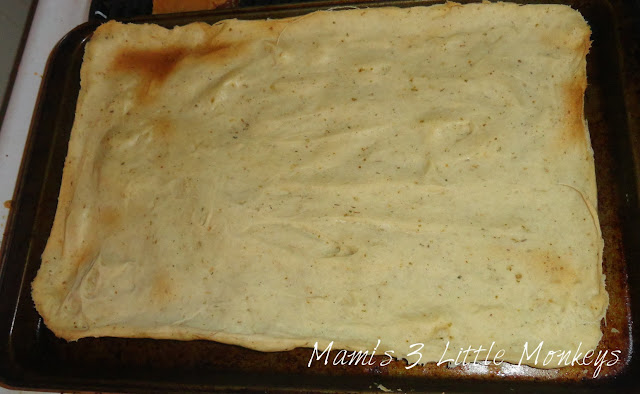 It did!! The crust didn't burn to the pan (I sprayed it with non-stick cooking spray first) nor did it stick at all! Once the crust baked it did get smaller, but just maybe by an inch tops. The crust was hard after it baked by it's self. Then came the fun part... which became way out of hand! Putting the toppings on the pizza. Now mind you, we made this pizza as a family... everyone had a topping to put on the pizza. I add the sauce to the pizza and used the whole jar of Ragu. Then Cade helped me add the cheese... we ended up using two, 2 cup bags of cheese. After this Dan decided he wanted to add Jimmy Dean's breakfast sausage, diced up... not gluten-free. While Dan was cutting up the sausage Jedilynn was putting the Canadian Bacon on and I was helping Ezio put Pepperoni on the pizza. After all of this, Dan and I decided that the pizza probably needed more cheese... but it already had FOUR cups of cheese on it! Really? How much cheese do we need? So, of course, maybe since we are in Wisconsin, we added about a 1/2 cup of cheese to the very top of the pizza. So how did it turn out? How was the crust? 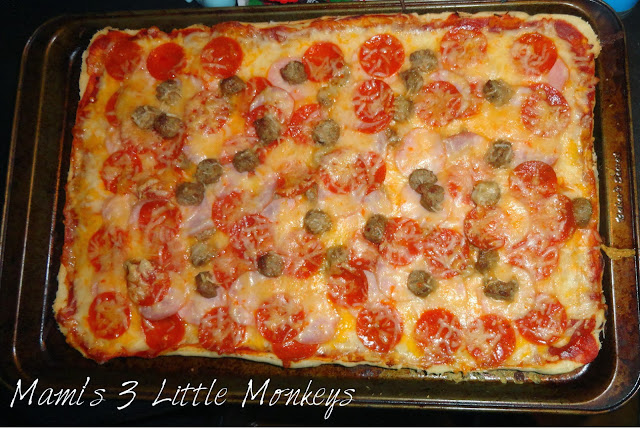 TADA! It was perfect and delicious, but I will admit we should not have used so much cheese. The cheese was a bit over powering. However, the crust did soften up. I think it sucked in some of the sauce which re-moistened the crust. I was rather pleased that Ezio was able to eat one of his favorite foods, PIZZA, without me having to have antihistamine ready for a reaction. Plus, it was so much more healthy then frozen pizza and such. Unfortunately Cade won't eat more then about five foods and pizza is not one of those five. Jedilynn is usually rather picky about pizza and I thought for sure she would not eat this pizza with three different meats on it. She did and asked for more! She usually says that pepperoni is spicy and such, but not a single complaint. Now Dan, doesn't like anything that is healthy for you and since he knew that the pizza crust was gluten-free as well as several ingredients on the pizza I was very surprised that he loved the pizza as well!

I was so thrilled that we made a pizza as a family and all of us loved it! Not a single complaint or anything. That is pretty unheard of here and I can't wait to make another pizza with the rest of the Namaste Foods' Gluten-Free Pizza Crust Mix with my family! It was a lot of fun as well as being delicious and healthy for all of us. It's nice to make a meal and not have to be worried that your two year old may have a reaction to it and not knowing just how severe the reaction may be.

As for the Chocolate Cake Mix!? I can't wait to make it, but I have to wait until Ezio is either visiting a family member or sleeping. He absolutely loves chocolate and there is no telling him he can't have it, he will not give up on trying to get/have some. So it's just easier to wait, plus it's not fair to him. Not that a two year needs to have chocolate whenever he wants, not saying that at all, but I know if I were allergic to something I loved I would not be happy if someone was eating it in front of me, yet telling me I couldn't have even a single bite.
I will do another post when I have made the Chocolate Cake!

Giveaway!
One lucky reader will win their own Namaste Foods Package, which will include a Namaste Foods Tote Bag, Pasta Meal, Coating Mix and Baking Mix! That's an entire dinner right there. For your chance to win, simply complete entries in the Giveaway Tools form below. A winner will be chosen at random and their entries will be verified. The winner will be notified via email, in which they have 48 hours to respond to or a new winner will be chosen. Good Luck!

Disclosure: I received the above products in exchange for my honest review. All opinions and experiences are 100% my own and may differ from those of your own. I hold no responsibility for the fulfillment of the prize.
Posted by sarh s at 3:48 AM