Little Dead Things started out with Teresa and some of her friends wanting to make lawn art because they could not find really anything that was well made and had a good zombie theme. Plus, they were tired of seeing all of the same old plastic Halloween decorations. During their lawn art creating they discovered that the molding materials that they were using could also be used for making candles and thus Little Dead Things was born. Nathan Parten come on board in April 2011 as a resident artist and "bokor in training". 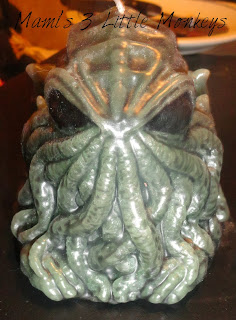 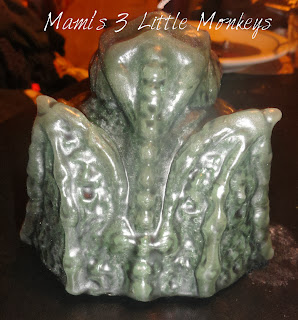 Cthulhu candle ($20.95ARV) is a medium sized candle and as you can see he is amazingly well detailed! "With malevolent black eyes and lost souls in his wings." This candle weighs about 1 pound and is about four and a half inches tall as well as four and a half inches in diameter. All of the candles from Little Dead Things burn just as regular candles do and they are all hand made! The scent of this Cthulhu candle is 'afterlife'.

Cthulhu is a cosmic entity in which started as a short story called, "Call of Cthulhu" which was printed in the pulp magazine "Weird Tales" in 1928! Cthulhu's creator, H.P. Lovecraft described him as "A monster of vaguely anthropoid outline, but with an octopus-like head whose face was a mass of feelers, a scaly, rubbery-looking body, prodigious claws on hind and fore feet, and long, narrow wings behind." I'd like to say that this candle of Cthulhu from Little Dead Things is an awesome piece of art work that details many of Cthulhu's features.

As you can see, Dan has not allowed me to burn this candle! Cthulhu sits on the printer on Dan's computer desk and that is it. No one is allowed to touch Cthulhu. Personally, I never heard of Cthulhu or H.P. Lovecraft until Dan and I started dated. Now we have several Cthulhu card and Action/Horror board games! He has some other Cthulhu pieces that I've gotten him over the last few years too. And I just found the actual Necronomicon (several by not as good authors) while at this years Renaissance Faire!

I would love to burn this Cthulhu candle as the scent when you sniff the candle it's self is ever so subtle you can't really get a good sense of what the smell really is. I know if we burned the candle you'd definitely be able to smell it, plus I think it would just be plain awesome to have a Cthulhu candle burning in our living room, especially when playing one of his games... okay, so maybe Dan has turned me into a little bit of a nerd and has caused me to become even more "weird". Cthulhu has definitely grown on me and I am currently on the hunt for a Cthulhu t-shirt to make into a cloth diaper for my boys!

Anyhow, the detail in this candle is just amazing! The outside of the candle is perfect and so smooth, the bottom is nice and flat so Cthulhu sits very nicely on any flat surface. I definitely love this candle and seeing as how Dan took it from me immediately when I received the candle, he obviously loves it as well! I actually had to wait until he went to bed in order to take a picture of Cthulhu, he was just joking around, but anytime I went by the computer desk he would say something along the lines of ... don't even look at it! ha.

Little Dead Things also have many other various and amazing candles available in her shop! Including Zombie heads and even a Zombie hand, Day of the Dead, Cthulhu and more.

Have you heard of Cthulhu before?
What is your favorite candle from Little Dead Things?
Cthulhu fhtgan!
Do you know what this means?

Disclosure: I received the above product in exchange for my honest review, all opinions and experiences are 100% my own and may differ from those of your own.
Posted by sarh s at 5:13 AM