Disclosure: I received the below products in exchange for our honest review, all opinions and experiences are 100% our own and may differ from those of your own. I hold no responsibility for the fulfillment of the gift certificate prize of the giveaway below.

Zoey's Attic was created by and is owned by Erin Delanty. She launched Zoey's Attic in November 2006. She was inspired to create Zoey's Attic when she welcomed her first child, Bridget in August of 2006. Bridget became a big sister in May of 2008 and the inspiration continues. When Erin had difficulties finding unique big brother/big sister gear and out of the ordinary newborn baby tees online she listened to friends who were also having difficulties and decided to use her background as a graphic designer and web developer to design her own line of products. Erin's initial idea was to create a web-based shop where new parents and parents-to-be could involve all members of the family in exciting "baby news" by offering a variety of pregnancy or baby announcements and hard-to-find big brother/sister tees.

Zoey's Attic sold its first shirt just two days after launching the website and development has expanded based on the initial and continuing positive response. They have since grown to offer many more products for the whole family and look forward to everything in the works for 2014.

SO WHO IS ZOEY?! Erin is often called Zoey and asked the origin of the name of her business. While looking for a name that had meaning to her status as a new mom, she settled on Bridget's early favorite toy, a stuffed zebra. "Zoey" the zebra was given to Bridget when she was born by Erin's mom and she felt it was the perfect name to connect three generations. 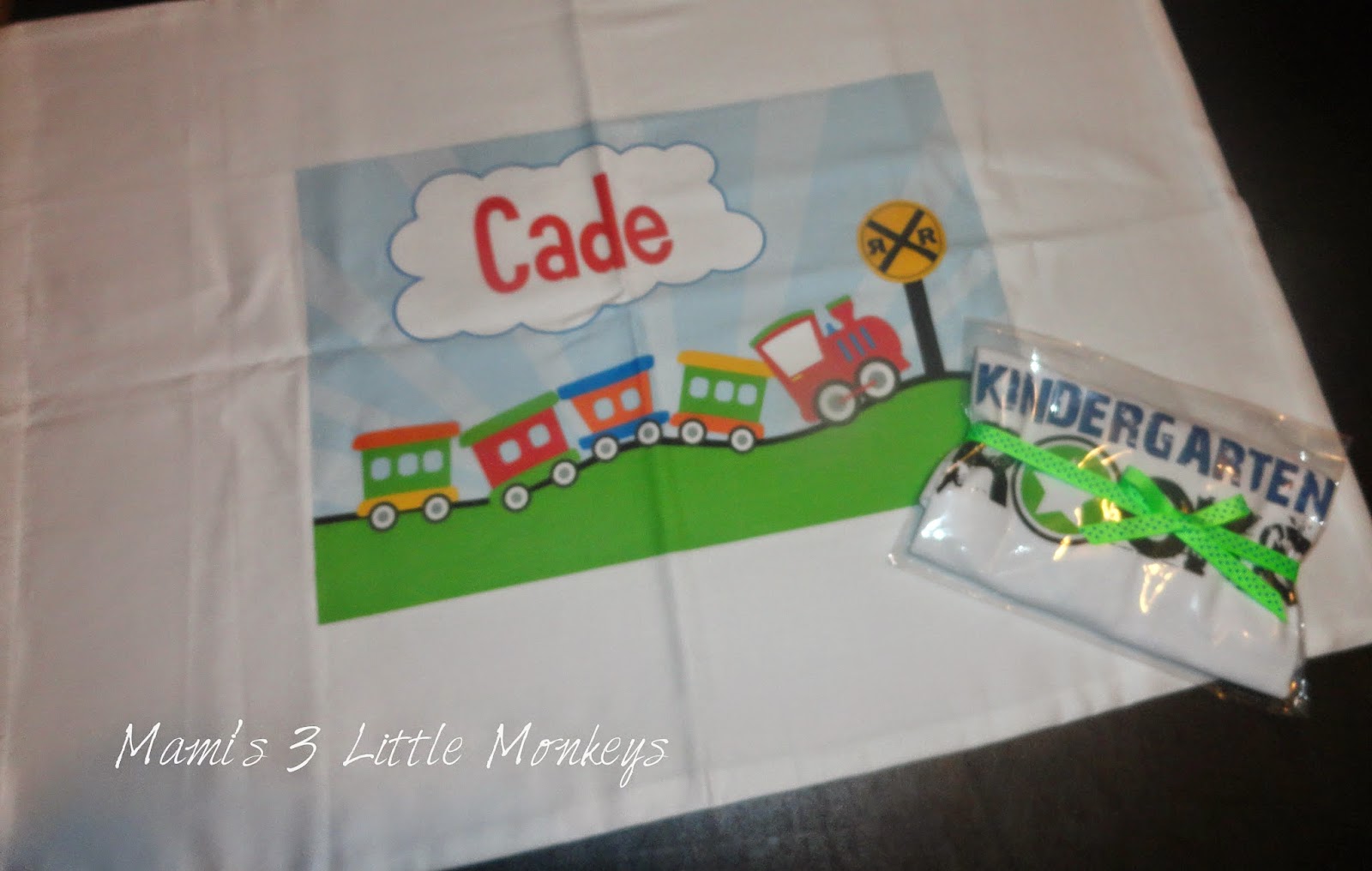 Cade received a Personalize Pillow Case ($18ARV) and Kindergarten Rocks T-shirt ($16.50ARV). Cade's pillow case is a standard sized pillow case measuring 20" X 30", there are two other sizes available - Toddler/Travel which measures 12" X 16" and throw which measures 14" X 14". You can customize the name and even the design colors on the Choo Choo Train Pillow Case! How cool, hey? The pillow case is digitally printed in Erin's basement and stands the test of repeated washings. It is printed with eco-friendly water-based inks on a high quality pillowcase. Their awesome digital printer (which is also super expensive) actually dye the fibers of the material, permanently. So this pillowcase will have the same feel and look after countless pillow fights and washes!

The Kindergarten Rocks T-shirt can also be personalized with the child's name on the back of the shirt, I chose not to have his name printed on the shirt. The t-shirts are digitally printed in Erin's basement as well. This means that the fibers of the shirt are actually dyed with eco-friendly water based inks and they are printed on a superior quality, super soft t-shirt for long lasting durability. Much better then iron on or heat transfer designs that fade and wear off rather quickly. And the rest stated above also goes for this t-shirt (and all of her other t-shirts and products).

Cade absolutely loves his pillow case! He loves trains and recognized that it has his name on it. He helped me put the pillow case on his pillow and sleeps with it every night. I had to wash it the other day and he repeatedly asked me if it was done yet so he could put it back on his pillow. And of course, when it came out of the wash, there was NO difference in the design on it, no fading, nothing! I LOVE that it is digitally printed on as his bedding and pillow cases have to be washed quite frequently. I know this one will definitely hold up through the washes. The kids have pillow fights and their pillows are on the floor more often then they are actually on their beds, no issues as of yet and we've had this pillow case for about 2 weeks now.

As for the t-shirt, Cade likes it and wanted to wear it the day after his birthday party when he received it. I want to try and keep it off of him until his first day of school. I'm not quite sure he understands that the first grade he'll be entering is Kindergarten, he just knows he's going to school with sissy and is super excited! I did try the t-shirt on him and it fits him perfectly. Due to his sensitive skin I wash all of his clothing before he wears it and the shirt had no fading or anything to the digital print just like the pillow case. I have not seen any other Back to School shirts like Zoey's Attic has and if there are any others out there, I doubt they are of such high quality and digitally printed with eco-friendly, water-based inks like this awesome t-shirt!

What would you purchase from Zoey's Attic Personalized Gifts if you had a $35 eGC?
Posted by sarh s at 12:57 AM