Anna's Linens was founded in 1987 and is the 14th largest retailer of home textiles and home decor items. It is a family-run company and was named after Alan Gladstone, the current chairman and CEO's, mother. Anna's Linens has over 300 stores through out the US as well as Puerto Rico and over 3,200 employees!

Cade loves his new Car's bedding set! It includes the comforter ($29.99ARV), sheet set and pillow case ($19.99ARV). As soon as we received the comforter and I pulled it out of the packaging he had to have it! 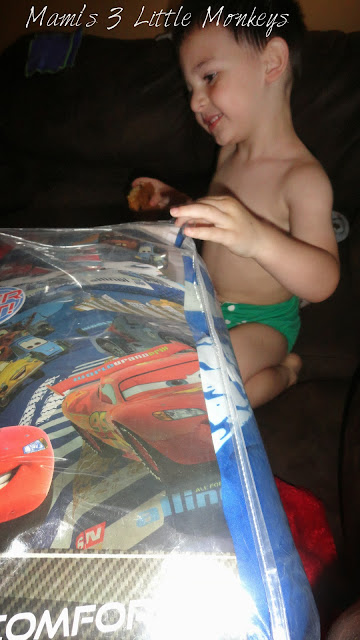 Cade was trying to control himself and wait a minute. Of course I opened the comforter right away for him and he sat on the couch with his new comforter and took a nap! It was perfect timing for it to arrive just before nap time. 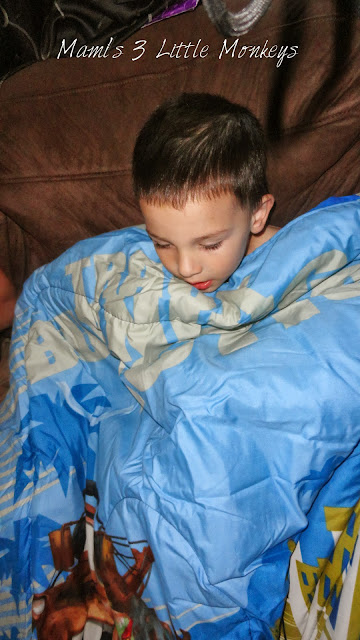 Oh boy, if it's time for his comforter and sheets to be washed, it can be quite difficult and I have to make sure this set is clean and back on his bed for nap and bedtime. The comforter and sheets are 100% polyester. Just a day after getting this set on his bed, he knicked open his ankle and it bled like crazy! He had blood all over his sheet, but thankfully he told me w/in about 10 minutes... I guess he was too busy playing with his cars. I put some blue Dawn dish soap on all of the blood spots, some of which were already dry and setting in, tossed it in a cold wash and ta da! it was clean when I pulled it out to put it in the dryer. I was so worried it was going to be stained for good, but there is not a single spot of blood left on it! Woohoo! 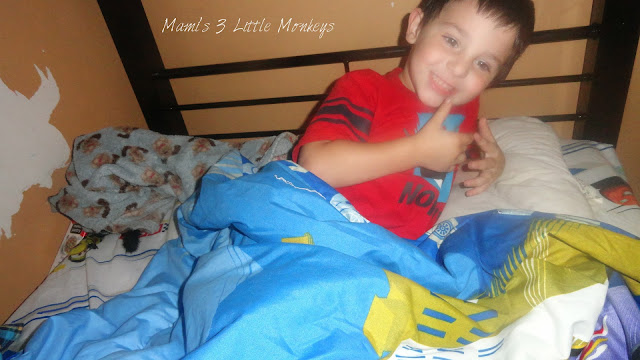 We've gotten the thumbs up from Cade! He even drags this huge comforter out to the living room almost everyday to take a nap on the couch next to me. I also have to be covered up with the blanket so that I am laying with him. It keeps us both nice and warm and is comfortable. In the photo above, his pillow case appears to be missing, I'm not sure which corner of his room him or Ezio hid it in. I love that all of the Car's characters are on all three pieces. Cade likes to name them all while pointing to them.

This bedding set washes very nicely, it's been washed several times with no piling and the batting in the comforter doesn't clump up like other comforters we have. Plus, I dry it with out wool dryer balls.

What is your favorite product from Anna's Linens? Do you have one near you?

Disclosure: I received the above products in exchange for my honest review, all opinions and experiences are my own and may differ from those of your own. I received no monetary compensation for this publication.
Posted by sarh s at 2:17 PM