Zak Morgan's The Barber of the Beasts CD Review & Giveaway!

Zak Morgan brings all of his life experiences and a simple delight in words and music to his fourth family music album, The Barber or the Beasts!
Zak Morgan was born in Cincinnati, Oh in 1970. His sense of humor and penchant for wordplay are gifts passed down from his grandfather, George "Bud" Rooney. Listening to his grandfather invent yarns, limericks and even new words had a profound effect on him. Now as a successful entertainer, Morgan has been compared to Shel Silerstein and Dr. Seuss because of his wit and child friendly sophistication. Morgan began writing songs in high school. By 1991 he has released two singles that were p-layed on over two hundred radio stations. In 1992 his topical musical parodies were heard daily on Cincinnati's most popular morning radio show. At that same time, he had many inspiring adventures, including the ascent of Mt. Rainier and a transatlantic voyage with the Challenge America racing team.
After earning a B.A. in English from Kenyon College, Morgan worked at Paradise Guest Ranch in the Big Horn Mountains of Wyoming. By day, he entertained children and at night he performed for family audiences. There, the seeds of his career as a children's performer were planted. In 1995 Morgan moved to New York City to work for Recorded Books, Inc., a leading publisher of audiobooks. Within four years he had risen to the position of Director of Rights Acquisitions and had immersed himself in the rich offerings of children's literature.
During his last two years at Recorded Books Morgan combined his humor, musical talents, and expertise in children's literature and began writing the songs for his first CD, Bloom. His debut album was met nationally with rave reviews and many prestigious awards. With its success, Morgan was launched into a full time career in family entertainment. June 1, 2003 marked the release of Morgan's second CD, When Bullfrogs Croak. The CD was nominated for a GRAMMY, a rare feat for an independent release. In 2007 he released his first DVD, ZakLand, with Hollywood director and producer Jay Silverman. In 2011 he released The Candy Machine, a concept album about temptation and the golden rule. The project was a collaboration with acclaimed bass guitarist David LaBruyere.
In February 2012, Zak signed a recording contract with myKaZoo Music/Universal Music Enterprises. He released his fourth album, The Barber of the Beasts, on October 30th, 2012. 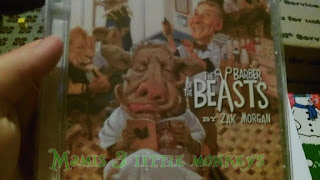 The Barber of the Beasts by Zak Morgan is a super cute and super fun children's CD.
Track titles:
Here is the super fun and silly music video for The Case of the Dry Marker w/Bootsy Collins!

Grnadma Lucille in The Case of the Dry Marker music video is Zak Morgan's real live Lucy "Grandma Lucille" Rooney!! How cool is that?!

Ezio of course is a year old, Cade is two and a half and Jedilynn will be seven in January, they all loved Zak Morgan's The Barber of the Beasts. It was so cute to see them all dancing around to the songs. Jedilynn is getting better at reading and loved that the lyrics are in the booklet, she has been carrying around the booklet reading and singing the lyrics, she can't read quite fast enough to read the lyrics along with listening to the songs just yet. I love that in the back of the booklet there is a glossary for some of the larger and "weird" words. Helped me out a bit with polyphloisboian from The Case of the Dry Markers, which according to the back of the booklet polyphloisboian means making an incredible racket or anything that makes a terrible noise. I had NO clue!

Visit Zak Morgan and check out some of his other CDs.

What CD of Zak Morgan's would you like? What was your favorite part of The Case of the Dry Markers music video?

Disclaimer: We received a copy of Zak Morgan's CD in exchange for this review, I was not compensated in any other way for this review and all opinions are solely my own!