Disclosure: We received the below products in exchange for our honest review. All opinions and experiences are our own and may vary from yours.

Old Time Candy
Old Time Candy is located in LaGrange, Ohio and owned by Karen and Donny Ray. They grew up in the late fifties and early sixties. Back in 1999 they walked into a large candy store in Cleveland, Ohio, that's when this all started. This store specialized in old time candy, Karen and Donny had no idea that many of their old time favorites still existed. They went online in early 2000 with their first candy assortment and began to grown. In 2003, they moved into a larger facility and expanded at the beginning of 2004. Then again in 2006 they moved into a much larger facility and this is where they've been located since. 2015 marks the 15th Anniversary for their candy business.

1970's Decades Box (4lbs)
I was so excited when I was presented the opportunity to choose and review a Decade's Box from Old Time Candy Co. They offer Decade's Boxes from 1990 all the way back to 1920! I knew right away which decade I wanted, I chose 1970's. My mom isn't a huge chocolate fan and after receiving this box of candies from her childhood I can see why, there wasn't nearly as much chocolate in this box as we have today. I'm also not big on chocolate so it was a win win for us. My mom was pretty excited when I received the box and went to share with her. There were definitely some candies that she hadn't seen in years and didn't know they were still being made. My grandma also loved the candies in this box, she's always had a sweet tooth. 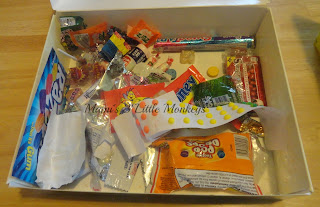 Every devoured the candies in this box. It was quite funny watching my 9 year old and 5 year old asking, "What is this?" about so many candies. My daughter tried Wax Bottles for the first time, my grandma and my boys enjoyed the Marshmallow Ice Cream Cones and so much more. I couldn't believe how quick this candy disappeared. As you can see above, I was left with lots of empty wrappers.

A decade's box would be a wonderful surprise for your parents or grandparents. It would also be fun to share old memories of old time candies with your own children, they probably haven't seen, tasted or even heard of about half the candies from your childhood.

Another thing I loved from my 9 year old daughter, "These candies are that old?!". Yes honey, most candies have been around at least as long as I've been alive and I'm only 26 years old.

Which decade would choose? What was your favorite childhood candy that you have a hard time finding or haven't been able to find?
Posted by sarh s at 5:41 PM